OUR HISTORY
Since 1887 Gonzaga Prep has been a leader in preparing students for life with a tradition of excellence in academics, activities, and service. As you walk through the doors of Gonzaga Prep, you discover a vibrant community with a strong sense of identity and purpose. From the classrooms to the playing fields, the chapel to the fine arts center-all the students, faculty and staff are meeting the challenges of today in preparation for the future.

Over a century ago, in September of 1887, Father Joseph Cataldo, S.J. along with eight other faculty members opened the doors of Gonzaga High School. Since then the Spokane community has been served by one of the finest educational facilities in the Inland Northwest--a school that has been unmatched in developing leaders spiritually, intellectually, physically, and culturally.

Throughout its distinguished history, Gonzaga has been unwavering in its strong belief that students should be guided by Gospel values of love and justice has endured. Gonzaga Prep continues to challenge those who walk through its doors to realize their potential as lifelong learners and leaders in service to others. Gonzaga prepares you for life.

Click HERE for a history of Gonzaga Prep written by Robert Carriker for The Inlander. 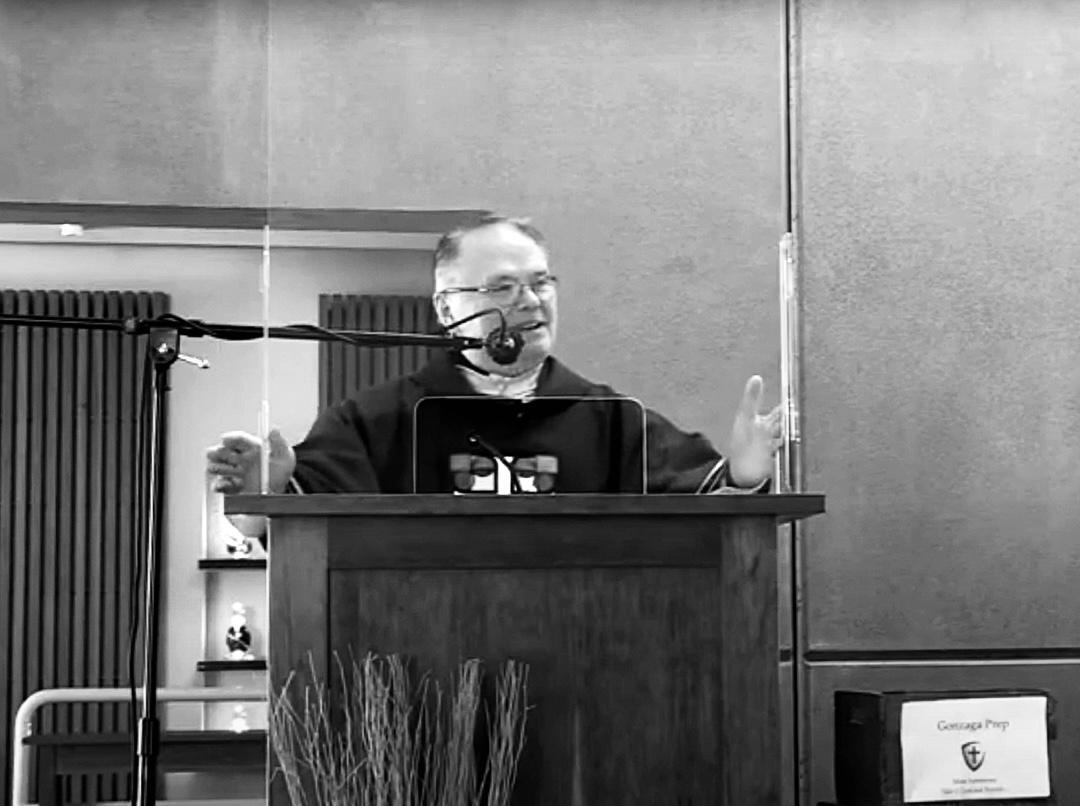 Fr. JK Adams, S.J. serves as chaplain and theology teacher at Gonzaga Preparatory school. He lives with his Jesuit brothers in the nearby Della Strada Jesuit Community on the Gonzaga University campus. He returned to Gonzaga Prep after serving 18 years at Jesuit High in Portland, Oregon. Fr. Adams also taught at Prep in the 1990s and early 2000s, and was eventually named superior of the Manresa Jesuit Community.

The Catholic Diocese of Spokane has a long history of supporting Catholic Schools in Eastern Washington. Dating to the 1870s, Catholic education has been at the forefront of the Church’s efforts to shape the hearts and minds of young people to live lives of service, peace, and courage. (Source: Diocese of Spokane)

A majority of students who attend one of the ten Catholic grade schools in the Inland Northwest continue their Catholic education at Gonzaga Prep.

JESUIT IDENTITY ROOTED IN THE PROFILE OF THE GRADUATE
For many years what made a Jesuit school Jesuit was that it was staffed by members of the Jesuit order who had been trained in the ways of St. Ignatius Loyola. There was a kind of second nature to how things were done based on that training. But an important demographic shift began in the waning decades of the 20th Century.

For many years what made a Jesuit school Jesuit was that it was staffed by members of the Jesuit order who had been trained in the ways of St. Ignatius Loyola. There was a kind of second nature to how things were done based on that training. But an important demographic shift began in the waning decades of the 20th Century. Where in previous generations, faculty, staff and administrators were Jesuit priests, brothers and scholastics, now the numbers of lay colleagues were filling the majority of those positions. This raised a question in the minds of those who were in leadership (Jesuit and laity) of our schools – what now makes a Jesuit school a Jesuit school? An enormous amount of prayer, scholarship and hard work went into assuring that the charism of the Jesuits would continue despite their dwindling numbers in the schools. Gonzaga Prep’s faculty and staff engage in regular Ignatian formation, and more than half have completed the Spiritual Exercises in Everyday Life retreat program.

But one of the crowning achievements of these efforts by leadership was the articulation of the Profile of a Graduate at Graduation document. This document published in 1980 named five characteristics that would be embodied by anyone graduating from a Jesuit secondary school. It did not mean to suggest that those graduates would have reached the pinnacle of those characteristics, but rather that they had embraced them as values and had made some marked advancement toward them during their four years at the school. The “Grad at Grad” document was embraced by all the Jesuit Secondary schools in the U.S. and continues to be a clear articulation of what it means to have a Jesuit education.