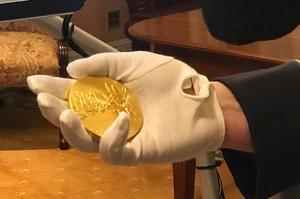 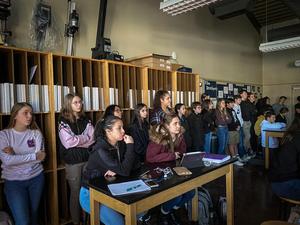 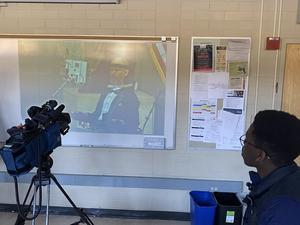 "I don't see my story as a football story, or even an ALS story, but rather, a human story" —Steve Gleason

Gonzaga Prep alumnus Steve Gleason `95 received the Congressional Gold Medal in a ceremony on Capitol Hill on Wednesday, Jan. 15, 2020. Remarks by members of Congress from Washington State, Louisiana, and congressional leadership echoed one after another, words of congratulations, inspiration, persistence, hope, and selflessness in awarding him their highest civilian honor for his tireless work to improve the lives of people with ALS.

The Congressional Gold Medal is the highest honor the legislative branch of the U.S. government can bestow on a person, group or entity.

Only 163 medals have been awarded since its inception in 1776. Gleason's award was passed by Congress in December 2018, the first to be bestowed on an NFL player. Other athletes to receive it include Roberto Clemente, Arnold Palmer, and Joe Louis. “Humanitarian giants,” as Gleason described them, include the likes of Mother Teresa, The Dalai Lama, Pope John Paul II, and Martin Luther King Jr.

Gleason invited a handful of Gonzaga Prep alumni to join him for the ceremony. Teacher, coach, and friend H.T. Higgins `78, astronaut Anne McClain `97, and 1995 classmates Tony Hazel, Stephen Steigleder and Dave Stewart, 1990 grads Noah Cooper and Jason Rubright all were in attendance along his wife, Michel, son Rivers, and dozens of others from Washington State University, the New Orleans Saints, and Team Gleason, the organization he formed with Michel after he was diagnosed in 2011.

On the Prep campus, students, faculty and staff watched a live stream of the ceremony during a special bell schedule on campus. A handful of seniors who met Gleason while on their Margins New Orleans trip shared their thoughts on the impact he’s had on their lives.

“Our mission is to go out there and make a difference, and he’s done that,” senior Xzandre Jean-Francois told TV news stations who were on campus to watch with the students. “He’s been an advocate for people who might have lost their voice. That’s something we’re all capable of doing.”

In an emotional tribute to Gleason, Saints quarterback Drew Brees reflected on moments of tragedy and moments of triumph. “In very rare cases there are those events that turn tragedy into triumph. That’s how I would describe the last 9 years since Steve’s diagnosis,” Brees said. “There is no person on earth with the strength, courage, passion, and tenacity to overcome all obstacles and make the lasting impact that Steve has made.”

Gleason accepted the award, and with the help of the speech-generating device the 2015 Gleason Act made affordable and available to others with ALS, he delivered remarks in his own voice that were gracious, hopeful, authentic, and punctuated with wit.

"While sharing one's weaknesses may not be common practice for people, especially for politicians in an election year -- wink, wink -- sharing my weaknesses was entirely critical for me to play eight years in the NFL," Gleason said. “It has been unquestioningly critical for my survival and purpose for the past 9 years living with a disease as dreadfully beautiful as ALS.”

He closed with a message of hope that was met with a standing ovation.

“If we can keep exploring, share our weaknesses with each other, and compassionately collaborate to solve problems, our human potential is boundless.”

Facts about the Congressional Gold Medal

Established: 1776, first issued by the Continental Congress
First recipient: George Washington
Number of medals awarded, to date: 163 institutions, people, or events including soldiers, explorers, inventors, peacemakers, human rights activists, pioneers, explorers, entertainers, athletes, veterans, politicians. Read the full list.
Process: To be awarded the medal, legislation must be co-sponsored by at least two-thirds of the members of the House and 67 Senators before the nomination will be considered.
Medal design: Gleason worked with the Congressional Gold Medal Committee on the medal's design. It features Gleason in a Saints jersey and honors his native state, Washington, with images of a mountain and forest.
Physicial medal: Ninety percent gold, whose price fluctuates. With design and production costs, it can cost many thousands more to produce.

» Read complete details about the medal.

Read past articles and other news stories

» Steve Gleason receives the Congressional Gold Medal: ‘The problems we face are our opportunity’

» The life and times of Steve Gleason

» A Day in the Life with Steve Gleason