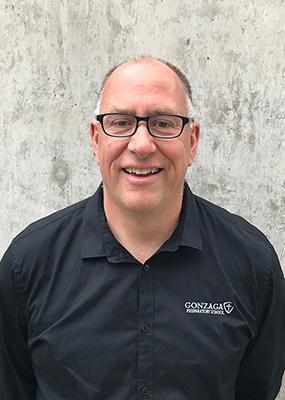 Math and Physics Instructor, Robotics, Jug/Sanctions, Recycling
Degrees/Endorsements: Masters in Teaching (Gonzaga University)
Years at Prep: 17
Joe Tombari is a Gonzaga Prep alum, who teaches math and physics, moderates robotics, administers Jug and sanctions, and is the school’s Recycling Coordinator. He’s been at Gonzaga Prep since 2001, previously graduating from Santa Clara University with a BSME and from Gonzaga University in 2007 with his masters in teaching. Tombari describes the transformation of students at Gonzaga Prep over time by saying, “I believe that our students really grow and find out who they are as an individual throughout the four years. They are very prepared for college and life beyond Gonzaga Prep.” He enjoys working with detention students to make them accountable and most of the time is spent recycling. Recycling is the new "Rock Pile."
You can often find him spending a lot of time with his Golden Retriever, Roma, or hanging out at the lake in the summers with his family, wife JoAnne, son Brian 2011, daughter Christie 2012. If it is February you will find him playing tag with his nine tag brothers. Tombari and nine of his friends have been playing the same game of tag since high school. In 2013, the Wall Street Journal wrote an article summarizing the game of Tag these Prep alum play each February. New Line Cinemas (Warner Bros) bought the rights to the story and published the movie TAG in June of 2018. His favorite job perk is working with his colleagues, faculty, and staff and he is very happy with his job.
Published April 24, 2019 Print